On 28 March 09 China Daily reported the opening of one more disco nightclub on the Gongti Strip, see the full article below, including the pic of what seems to be two “Balinghou”.
I am constantly amazed by the ignorance of some expats and local Chinese on what is really happening in the turbulent Beijing nightlife. I am writing my book on Chinese society and I mention the incredible changes in society with the new “Balinghou and Jiulinghou” generations, I am challenged by those people who often have no clue on how those new generations act and think. Not that all are the same, obviously. But a late night visit to discos in Gongti Xi Lu might be an eye opener. “We Chinese don’t go to bars, we Chinese don’t stay up so late”. Yeah. Just pop up on the Strip at 3 am and you’ll see. As for how they think, well, there are some (other) China Daily articles that might bring a light into your darkness. As I said in one of my recent articles, better to carefully check the younger graduates out before hiring them. Some can be great but some have, as the older (Chinese) generations openly claim “no any responsibility” – including at work.
Going loco @ LA Club: more action on the Gongti Strip 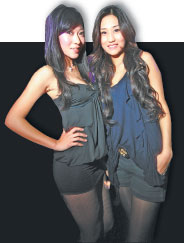 Making a big splash in the Beijing club scene, Banana (as in GT, Coco and most recently, Babyface) has added a new hotspot to its luxury empire.
LA Club claims to be the city’s “hottest VIP hip-hop club” and hip it certainly is. From its gentle opening at the beginning of March to its scandalously sexy fetish party last Friday, the club blasts out hits from the golden era of disco and funk to the freshest hip-hop tracks of today.
The trendy aims to celebrate the full Gucci-Moet-Cartier hip-hop experience and feed selective urbanites with a taste for celebrating the high life.
With a 1971 Cadillac parked outside, and more than 60,000 faux diamonds and a rotating, elevated dance floor at its center, LA Club is sure to dazzle the eyes and ears of even the most experienced clubber. Banana’s sound engineers have a heart-thumping Turbosound system that makes you want to clap your hands and strut your stuff all night – the DJs keep the dance floor grooving ’till 6 in the mornin’.
The club plans to line up an impressive list of international artists over the coming year. It’s quickly becoming the place to grind with the capital’s beautiful people. If you’ve got money to burn, you’ll definitely want to try out one of the revolving, ultra-deluxe VIP booths, where you can sip on gin and juice, indulge in bottles of Mumm Champagne (at 580 yuan a time), or the two-for-one mixed drinks. LA Club signifies a new height of Beijing clubbing. Hip-hop hooray!
West Road of Workers Stadium, next to COCO Banana.
Story by Carissa Welton, photos provided by LA Club