The local press and blogs have been very critical of the incredible chaos and total lack of customer service (do they understand that word?) in the modern Beijing Airport while it was even by some called “the best in the world”.
Long way to go. Some people got so desperate, locked up for hours in planes without food or drinks, that they called the police. 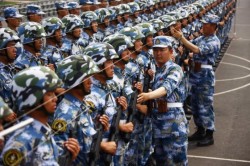 how much time and effort was spent here?

If our Chinese friends would make as much efforts as they did for the Parade, things might be better. I think sometimes they set their priorities real poorly.