Hein Verbruggen, 67 years old, was recently awarded the China Friendship Award, among a total of 12. It is the highest award China gives to foreign nationals who have made “outstanding contributions to the nation’s economic and social progress”. The next U.S. ambassador in Beijing is said to also have received the Award (not confirmed yet).
Gilbert received the same award on 29 September 2005 from then Vice Premier Ms. Wu Yi.
Verbruggen, from Holland, had led the IOC’s Oversight Panel for the 2008 Beijing Olympics and was thus deeply involved in the Beijing mega-show.
Gilbert too got the award for his long-term involvement in the preparation for the Olympics.
What Gilbert does not share however was the way to analyze the preparations: Verbruggen was rather sugar-coating everything to please Beijing. Gilbert has a reputation of being “rather out-spoken” (an understatement).
Verbruggen has since then left the IOC to seek “a quieter life”. Well, dear Hein, there we also share something. I’m happy it’s all over and feel it is still …. a bit early to make a final assessment of the mega-show.

Gilbert was recently on Flemish TV (VRT).
Tom Van de Weghe made another interview with me on the legacy of some of the major Olympic venues. I feel sad how the Bird’s Nest – the project I helped to launch – has lost its original vision as a major sports and event arena. Officials are mostly to blame due to their interference. Important to stress here that it is NOT a “government” project – it is a project financed in part by the private sector under a Public Private Partnership scheme.
Now it is becoming an embarrassment as it stands there just for visits – planned events are months away and few. No soccer as nobody wants to play there and the owners are not interested either: maintenance costs to host a few soccer games are way to high.
All that happens when officials do not listen to good advice, think they don’t need foreign expertise (e.g. international operators) and mess it up.
The story of this architectural master piece is not yet at the end. Just wait. So sad for the architect Pierre de Meuron who had a correct vision.
In the video: Dieter Depypere (videos), Gilbert Van Kerckhove, Tom Tobback.
“Six months ago the world’s eyes were focused on China, when the Beijing Olympic Games kicked off spectacularly. Now that the spotlights are out, what’s happening with the Olympic infrastructure, and what’s the legacy of these Games for the Chinese? A report for Sportweekend.” So says Tom.
You can watch it on Facebook:
http://www.facebook.com/n/?video/video.php&v=53484921485&aref=17524202
Well done Tom! 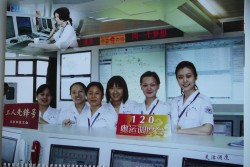 As a volunteer she worked at the Beijing Emergency Center “120” during the Beijing Olympics, to help fielding calls from foreigners in distress, when the normal interpreters could not understand the heavily-accented English. 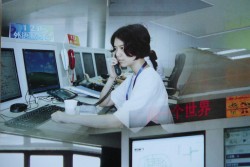 On Friday evening 26 December we were invited by Ms. Janice Tan of the Hotel to have a VIP tour. She had attended the recent Rotary lunch and graciously invited us. Along came Rtn. Don and his wife, Ming Wong of United Family Hospital, Raymond & Julia of the Canada China Business Council, Terence of Vestas and Paolo Alberto Volpe (Vision / Techimp).
The Hotel is located on Beichen Xi Lu, right in front of the Watercube, with a gorgeous view on the Olympic Green.
We met at Karma Lounge, Lobby Floor and then had the welcome cocktail at Happiness Lounge, 21st Floor.
We visited several suites before enjoying a “Culinary Journey”:
– Japanese Appetizer at Kaden Minokichi – 21st Floor
– Chinese Light Main Course at Pangu Wenqi Restaurant – 5th Floor
– Western Light Main Course at Auspicious Garden – 2nd Floor
– Dessert at French Dining Room – 21st Floor
– After Dinner Drinks – Coffee/Tea at Happiness Lounge – 21st Floor
To commute between the different locations we all rode in the “subway car” (!).
The evening ended with an impromptu singing performance by Paolo and two of his musical stars. We all went home stuffed and happy (and impressed, by the hotel and by Paolo).

See some of the pictures taken, including of the “Dragon Wall” (outside)

On 27 December we attended a relaxed evening in the luxurious “Golf Central” in Oriental Plaza (it’s in the basement, access next to the Hyatt Hotel) – to meet and mingle again with many famous China sport medalists (I was the only foreigner…). They are gymnasts, ice skating athletes and others. I’ve met them already a couple of times and they are very nice, without big egos.
One reason being there is my history with the Beijing Olympics, the other one is that I am involved in a Chinese company, building and managing several golf courses. And no, I do not play golf. I also did not try the installation in Golf Central as a golf swing is not that good for my back.
We chatted with Huang Xu, a famous gymnast from Jiangsu Province (born 4 Feb 1979 – 162 cm). He couldn’t swing much either as he is still recovering from the grueling training and competition, putting a heavy strain on all joints. His specialties are pommel horse and parallel bars.
His impressive record:
– 2000 Olympics Gold Medal – Men’s Team Combined Exercises (artistic gymnastics)
– 2008 Olympics Gold Medal – Men’s Team Combined Exercises (artistic gymnastics)
– World Championships Gold medals: 1997 – 1999 – 2003 – 2007
(and more…)
He intends to retire after next year’s World Championship and hopes to study again and learn English. His dream: to become a coach, trainer or judge.

Pictured: with Huang Xu (blue vest) and many other medalists; Huang Xu trying a swing for the fun; a view on the installations in Central Golf