I found this on bbs.chinadaily.com.cn, dated 18 December 2014. It lists the 10 bad behaviors of Chinese drivers. Amusing as I guess there must be at least 100, the list is endless. Anyway, interesting view:
Editor’s note: MichaelM, our blogger from the US, sums up the most common, chaotic driving practices of Chinese drivers.
1. They will exceed the speed limit so long as there is no traffic camera in sight.
2. They will pass you like crazy on the shoulder of the road.
3. They will cut you off with mere inches to spare.
4. They will honk at you repeatedly with “seemingly” no patience at all.
5. They quickly use the lane of oncoming traffic to bypass numerous stopped cars or going slow in a traffic jam. Oncoming traffic just makes room for them, as if it is normal.
6. They will use the sidewalk if it’s convenient for them to get ahead of you.
7. They will pull out in front of you no matter the situation and expect you to stop.
8. They will cut in on you in traffic and expect you to submit and allow them to do it.
9. They do have laws very similar to ours in the West, but, they are totally disregarded. They mean nothing because there is no one to enforce them except for the traffic cameras, which are few and far between.
10. Pedestrians can be seen nearly everywhere walking in the middle of the road, with seemingly no concern for their own safety or the fact that they are holding up traffic. The drivers will honk at them and simply go around them as if nothing is wrong.
So, Michael, go back to the street and add the other 90!
Not to be surprised, Beijing traffic remains a mess, traffic police is nowhere to be seen and is totally useless. And makes pollution worse.

Sometimes life in Beijing for a foreigner can be both challenging and interesting. Like in my case, with my Chinese being reasonable for social contacts but pretty useless for business, it also sometimes leads to frustration.
The Chinese side (whatever that means) insisted I joined some big Taiwan seminar and banquet in Diaoyutai State Guesthouse in Beijing, most probably the most prestigious location of the city, food being normally better than in The Great Hall of The People.
I managed to escape from the seminar, luckily, as everything was in Chinese without translation. On top of that all the speakers (idem in the Banquet) were shouting like hell, making it also rather annoying. My daughter was getting tired of the noise in the banquet.

So, what was it actually all about? I still have no clue. My entourage just tells stuff me on a need-to-know basis. No extras.
The seminar was in one building and the banquet in another one. Nice walk.
During the banquet I also escaped by not having to sit at the VIP table. There was just one more foreigner in the whole hall and he was sitting pretty lonely on that long VIP table. Nobody seemed interested in him.
I got however a lot of attention as many of our Chinese friends were there and many other came to take picture with me. So, smile, give business card, say cheers and then next one. Who they were, mostly again clueless.
Oh well that is part of Beijing life. A must to stay connected to the “important people”.
The food was good, the red wine was pretty good and some of the performances were nice.
The gardens of Diaoyutai are meticulously maintained and are lovely, and we were so lucky with the weather.. Once I was there for a night party and it was really pretty with all the lights on the trees.

This interesting survey was published by Internations. For the original article:
http://www.internations.org/expat-insider/2014/china
Every survey has a different angle and one can always criticize the results. It also very much depends on how the survey is carried out and who were the typical contributors. Here they are mostly young to middle-level professionals who have a rather steady job and are “legal” (see the graphics for the details). Anyway the results are interesting while it all finally depends on the individual way of living, taste and goals. For quite a number of expats, life overall is rather good in Beijing while costs of housing and schooling are a serious concern, along the heavy pollution and more stringent visa rules. See here the results:
China is a great place to work, but can it feel like home? Results suggest that it is neither easy to settle in nor great for expat families.
An economic hub, people go to China for business and work, as well as to benefit from the country’s comparatively low cost of living. However, although China ranks 4th in Personal Finance and 19th of 61 in the Working Abroad Index, it faces sharp criticism in regards to the general quality of life.
Only 14% of expats in China are completely satisfied with their life abroad, which lags behind the global average of 21%. Moreover, survey participants also indicate a marked dissatisfaction with the country’s medical facilities; only 32% agree the system is good compared to the global average of 53%.
Expat Statistics China infographic 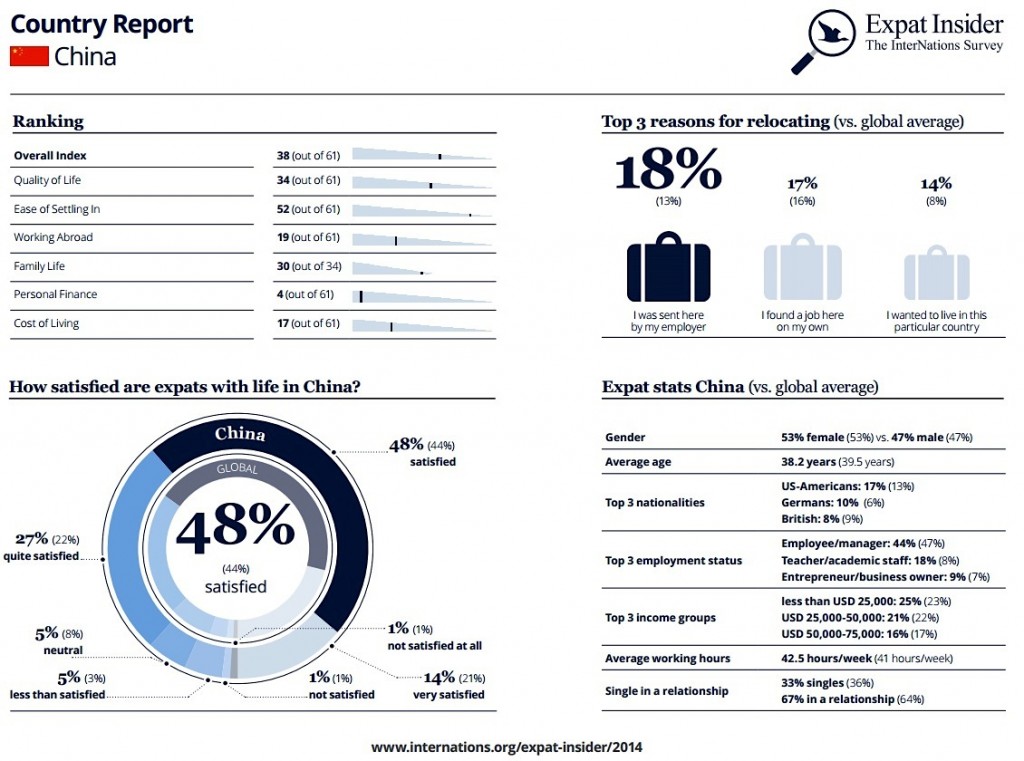 Small Cost in Big China
The low living costs in China makes it a beacon of value in an expensive world. While only one in three (35%) expats the world over find their local cost of living to be either good or very good, China excels with nearly half of the respondents living there agreeing to the same (48%).
The comparatively low cost of living is complemented by a greater disposable income, as 59% of expats in China agree that their income easily covers everyday expenditures, in contrast to the worldwide average of 45%.
Companies seem to be trying their best to attract expats to China, too. Four of five respondents (83%) say they received help from their employer with attaining a work visa and two in five (42%) say they were provided housing by their companies. This overshadows the global averages of 65% and 29% respectively. It also helps explain why the most frequently cited reason for expatriation to China is work; 18% say they were sent by an employer and 17% found work there themselves.
Finding Ying and Yang
China plummets down the overall country index when one takes the Ease of Settling In into account, however, where it ranks 52nd out of 61. Famed for the affability of its people, the survey results highlight how expats experience a chasm between politeness and formulating friendships. Although three-quarters of respondents (76%) agree that they work with very few expats, they are less likely to have friends who are local residents. Rather, 45% say they usually meet people at expat events, whereas this figure is just 36% worldwide
However, this could ultimately be due to the culture gap between expats and the local culture. Although 43% of participants profess to the ability of being able to speak Mandarin, just one in five (23%) agree that it is easy to get used to the local culture compared to the global average of two in five (41%). As such, only one in ten (12%) expats in China feel completely at home.
Homeschooling Anyone?
Further dragging China down is its poor display on the Family Life Index, where it comes just 4th from the bottom (30th out of 34). However, this is mainly due to its education system, for the country remains on par with the global averages for most aspects of childcare and general family life.
Expats in China are, with 16%, half as likely to agree that education choices were numerous and readily available compared to the worldwide average of 32%. Thus, respondents in China are more likely to send their children to an international school than their compatriots elsewhere (45% against the global 35%) and as a result find education to be very expensive.
However, according to the survey results, one of the grimmest aspects of life in China is the atmosphere it presents for children. One fourth of participants (25%) are not happy in regard to their children’s health and safety there. On a global scale, only 11% feel this way.

On 23 June Sun and myself attended the National Day in the residence of the Ambassador Paul Steinmetz. It is an event I normally attend every year. The residence is in a very unusual location, in a hutong between Dong Si Nan Da Jie and Chaoyangmen Nan Xiao Jie. The event is in the nice garden and usually the air is humid and hot as in a sauna. This year we were lucky, no air and pretty pleasant.

The building carries many souvenirs for me as I was very close to the first Luxembourg ambassador in the early eighties. He had the arduous task to renovate the building and starting the embassy when electricity was not always guaranteed in the hutong. We all lived in the Beijing Hotel at the time and I also gave my small advice during the difficult renovation work (and for the problems of rats and mice…).
Pictured are the Luxembourg ambassador as well the ambassadors of Benin, Cambodia, Philippines, Bolivia, Congo Republic, among others.

On 6 June we were invited to the National Day Celebration in the Swedish embassy. The evening started not so well with a big rain but had decided to go anyway. That was a clever decision.
Arriving at the embassy, under a drizzle, we immediately got our big umbrellas that we happily took home. Their quality seems better than the ones I once got at the EU delegation: those broke down the same day..
Sweden is not exactly a “big country” so we were totally amazed by the scale and the variety of the celebration. If I understood right, 1,500 people were invited, that would be more than the mega-reception each year in the EU Delegation. I wonder how that compares with another great mega-celebration each year in the Polish Embassy. Well, the embassy is not only very nice (probably one of the few good-looking ones) it is also pretty huge as we discovered. The food and the drinks were great, performances were great and everybody seemed to have a good time. We also met some old friends, and made new ones. And the skies became friendlier.

I won’t give all details of what went on, just look at the pics. See the ambassador’s welcome, Robert Wells Trio & Vocalettes (the new ABBA) and the dance around the maypole.
I just hope we get invited again next year!