This time a TV interview in my office by RSI, by Laura, Saturday 1 August 2015. We had to clean up a bit our Chinese antique warehouse, read, our office.
Theme: Beijing was just selected the previous day for the 2022 Winter Olympics.
While the interview was time ago, still relevant to give some details. 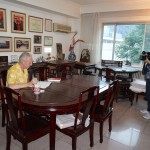 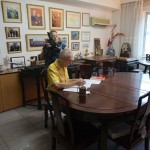 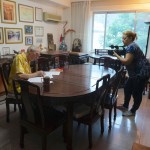 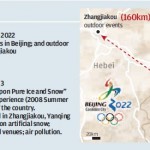 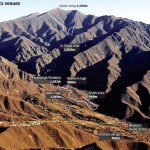 Questions were directed at the environmental impact, also looking back at the 2008 Olympics. As 2008 clearly proved, controlling the pollution levels required drastic and one-time measures. After 2008 pollution only got worse and now the Chinese government has no choice but to tackle the problem head-on. It will require some time as the needed changes are not so easy to implement. The integration of the Beijing-Tianjin-Hebei area, the reduction of industries within the city, the clean-up of polluting industries in Hebei, the reduction of population in Beijing, the new green belts around Beijing, and so on: it will require time to implement it. I remain confident that by 2022 pollution levels will be pretty lower.

As for the issue of water, I also hope the city will continue to make efforts, to save water, to bring in water from South China, to fill up the reservoirs feeding the city (most are at low levels as described in my book Toxic Capitalism). Water is needed to make snow as the skiing areas have too little snow if any. Actually most skiing areas around the world face the same problem, except for Switzerland. So, the issue is not limited to Beijing. Chinese people start loving the sport and only stricter environmental rules can make that the water is recycled, trees are planted, ski slopes are maintained without further destruction of the soil structure, fauba and flora. I am modestly optimistic that Beijing will more or less succeed here too.
As usual in China, we need to wait and see that promises are kept.
As for the venues, see here a nice recap from Wikipedia & others, see also the maps from SCMP