On 14 March another talk to around 30 delegates from the MBA group of the University of New Hampshire, a regular in Beijing.
As usual in Novotel Peace. 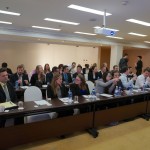 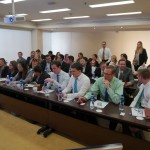 I felt the Professor was a bit surprised or even uneasy with my rather dark view on the situation today in China. They had another presentation earlier by the vice president of a large and very well know foreign company, with extensive operations in China. His views were pretty upbeat, contrary to mine.
Later I got feedback on the comments from Chinese participants who were not offended at all and agreed with my views. Confirms to me that quite a number of people are too worried that certain things are being said: call it being too cautious, without reason. Of course all depends on the audience.
As I mention in the beginning of the presentation, the idea is to give a different view on China. Actually my views are very accurate and are based on solid information, in line with well-know economists. The same day I was reading China Daily: it said much the same: “the situation is grim”. My “Outlook 2016” gives a more complete and balanced view, more on that in another post.
Other speakers often tend to sugarcoat the situation, giving a rosy picture of a bad situation. They do this to please officials. Because they work for a major company (selling to China) they are worried their “frank views” might damage their relation with the government,. They also have bosses and are thus careful. So, I do not really criticize them that much. But some can also completely ignore reality, like wondering if they ever lived and worked in China.
Having speakers from the financial/economics area would result in a different view as they don’t have this limitation. Same like me and on top of that I don’t have a boss to micro-manage me.
Exactly this week the media were full of rather dark announcements on curtailing any “divergent views” – and on the growing amount on cases of social unrest in the country.
As I always explain, the students must be able to listen to different points of view to make up their mind. In this respect I also encourage organizers to let them listen to officials, even if their talks are boring, contain little of relevant information and normally never answer a serious question. It is part of the learning curve!

One thought on “Talking to University of New Hampshire: no sugar coating”