After a protracted battle, Belgian EANDIS officially announced earlier this month the discussions with China State Grid were definitively stopped.
A letter of the Belgian State Security had made waves earlier on, as it wanted to point out the possible security issues by granting shares to the Chinese state company. Others dismissed the warnings as China State Grid would not have access to “sensitive customer data”.
The negotiation had to be shelved as the 236 Flemish cities concerned could not agree on a fusion of the different city utility services, a main condition for the deal. Antwerp was one of the most opposed to the fusion.
Others, including EANDIS, said to be disappointed.
Again a sad example of political bickering in Belgium.

In the media, a lot of criticism against the deal.
Some were against a Chinese company as it was an “arm of the Chinese Communist Party”.
Others wanted the electric utility to remain Flemish and Belgian investors to join an investment that would give 4% interest returns while normal bank interests are less than 1%: “Why give all the money and benefit to the Chinese, they will take all the profits to China”.
Commented a member of the Flemish parliament (Green Party): “Do we want a Chinese or a Flemish Energy Network? Do we want to see every year 40 million euro to flow to China?”

First of all, people should respect international investment deals. The Chinese company would invest 830 million euro in the Flemish network for a 14% share. Obviously a company wants to have a return on investment and repatriate it. If a foreign company invests in China, they expect the same.
So, a lame argument.

As for not inviting Belgian investors I must agree. As I mentioned earlier, since time we see good Belgian companies disappear and being bought by foreign groups, French, American, Japanese, Swiss, name it.
Belgium has shown incompetence to retain its valuable companies, through mismanagement, lack of financial support and creativity, among others. Why can’t they make the companies profitable? Look at “Belgian” beer and chocolate: how much is still in Belgian hands? Not even to mention companies in the mechanical and electronic industries. What a shame – I worked for some of those and saw how things went the wrong way.
So, why does Belgian EANDIS need to ask China for money? Why can’t Belgium solve the need for capital and new management? For sure many Belgian people would be willing to put their savings in an investment that returns annually more than 0.5% or something.

Chinese companies on a buying spree

We do see in Europe (and other countries…) a growing opposition to Chinese buying up companies and other assets, partly due to their sometimes poor approach and execution. 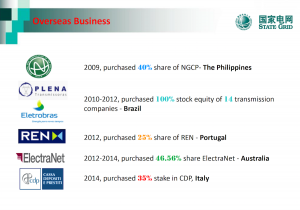 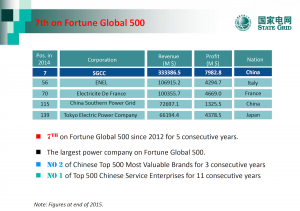 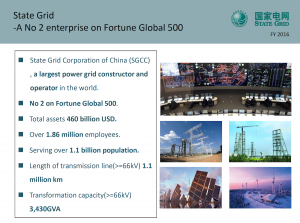 Actually China State Grid has been involved in transmission and distribution in electric networks in many countries, such as Brazil, The Philippines, Portugal, Australia and Italy. As far as I know no any country has had complaints of “security issues”.
It is the largest utility company in the world. It also has several factories that are state of the art, leaving most EU companies behind.

Is China State Grid to blame?

Some argue that the Chinese company did a poor PR job and did not communicate well to defend its proposal. Up to a certain extent I agree, the company is indeed weak in communication – I am also requested NOT to talk about the work we do with them… But all in all, in view of the internal bickering in Flanders, what could the Chinese do?
At first I dismissed the accusation that the company, as many others, is “managed by the Chinese Communist Party”.
Unfortunately, this objection related to SOEs (State-Owned Enterprises) is now supported by President Xi Jinping himself:
See:
“What mixed signals on TV say about China’s on-again, off-again state firm reforms. Question of whether the party or boards should dictate business decisions is still a running issue.
Xi’s speech on the SOEs clearly stated the party would strengthen control over SOEs and exercise more oversight instead of allowing market forces to play a “decisive” role as earlier promised. At the high-level meeting Xi made it abundantly clear that the party leadership is “the root and soul” for SOEs.”